ALAN TURING AND THE DEEP STATE There is a belief that a powerful cabal supported both sides in World War II.

The belief is that this cabal financed Hitler, supported Churchill and helped to plan Pearl Harbour.

Reportedly, the cabal manipulates both 'fascists' and 'Zionists'.

Lord Sempill was a member of the Right Club, founded in Britain in 1939, the main object of which was "to oppose and expose the activities of Organized Jewry."

Other members included Lord Redesdale, the 5th Duke of Wellington, the Duke of Westminster, the Marquess of Graham, and the Earl of Galloway.

Lord Sempill was awarded the Distinguished Flying Cross for his service during the war.

Sempill was presumably working for 'the cabal' and thus was protected from prosecution, along with people like Lord Ted Rothschild and RICHARD MEINERTZHAGEN a TOP ZIONIST SPY? 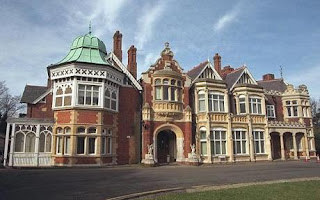 Alan Turing was Britain's top code breaker during World war II and is the father of computer science.

"It has been estimated that the work of Turing and his colleagues at Bletchley Park shortened the war by between two and four years..."

The cabal presumably did not want the war shortened by 2-4 years.

Turing's Bletchley Park discovered what Lord Sempill was up to.

In August 1941, Churchill met Roosevelt. The Japanese quickly obtained details of the meeting.

The encrypted notes, sent by a spy to Japan, were intercepted and decoded at Bletchley Park.

An investigation concluded that only two men could have created the notes: a Commander McGrath and Lord Sempill.

Sempill continued to spy for the Japanese.

Only in 2002 were classified documents about his activities released into the public domain.

Some people believe that Turing was framed and murdered.

In 1952 Turing was accused of being gay.

He was given the choice of prison or chemical castration.

Reportedly, he chose to be castrated.

The Deep State "is a parallel secret government, organized by the intelligence and security apparatus, financed by drugs, and engaging in illicit violence, to protect the status and interests of the military..."

The 'Deep State' is the hidden government.

At Global Research, on 7 April 2011, Kevin Zeese reported on the bad guys.

The Link Between War and Big Finance

1. Both the military-industrial complex and the Wall Street oligarchs benefit from certain wars.

Secretary of State, William Jennings Bryan wrote of World War I: “the large banking interests were deeply interested in the world war because of the wide opportunities for large profits.”

2. The most decorated US Marine in history, Smedley Butler, said:

"I was a gangster for capitalism.

"I helped make Haiti and Cuba a decent place for the National City Bank boys to collect revenues in.

"I helped in the raping of half a dozen Central American republics for the benefit of Wall Street... In China in 1927 I helped see to it that Standard Oil went on its way unmolested."

3. In Confessions of an Economic Hit Man, John Perkins explains how World Bank and IMF loans are used to make profits for US business and saddle countries with huge debts that allow the USA to control them.

If a country refuse to "honour" its debts, the CIA topples its leader.

4. Tarak Kauff, US Veteran For Peace activist, stated, "The wealth of this country is disappearing down the tubes into the stuffed pockets of the financial/military/industrial oligarchs. Americans are being bled dry while people of the world are literally bleeding and dying from U.S.-made weapons and warfare."

On 6 April 2011, Professor Peter Dale Scott, at Voltaire Network, tells us about:

The "Deep State" behind U.S. democracy

According to Peter Dale Scott:

In the Mercedes were a top drug trafficker, a senior police officer, a Member of Parliament and a beauty queen.

The Deep State "is a parallel secret government, organized by the intelligence and security apparatus, financed by drugs, and engaging in illicit violence, to protect the status and interests of the military against threats from intellectuals, religious groups, and occasionally the constitutional government."

2. The influence of the deep state, the American war machine, has continued to increase.

The CIA under William Casey worked with the drug-dealing Bank of Credit and Commerce International (BCCI) in creating a huge Afghan narco-economy.

The BCCI was a big global drug-laundering bank.

Gulbuddin Hekmatyar was probably the leading heroin trafficker in the world during the 1980’s. He also became the leading recipient of CIA largesses supplemented by an equal amount of Saudi Arabian money.

3. The media presented Carter as a populist candidate, a peanut farmer from the South.

Carter had been prepared for the presidency by Wall Street, and particularly by the Trilateral Commission, funded by David Rockefeller, and directed by Zbigniew Brzezinski.

Aangirfan believes that 9 11 was carried out by people within the governments and institutions of many countries, including the USA, UK, other countries in Europe, Pakistan, Saudi Arabia, Turkey and Israel.

We call the bad guys Mafia-Fascists.

Reportedly, tied to Porter Goss' 911 training operation in Florida were the Muslim Brotherhood, and agents of the intelligence agencies of Saudi Arabia, Germany, Syria and Pakistan. (LOCKERBIE AND THE FINANCING OF 9 11)

Reportedly, Sam Giancana rigged the US presidential election for President Kennedy. Reportedly, Giancana had links to 7 US Presidents. According to Giancana, both presidents Roosevelt and Truman were 'bought'. (Sam 'Momo' Giancana: Live and Die by the Sword)


In Italy, the P2 masonic lodge was a link between the mafia and the government. (http://www.american-buddha.com/darkhistory3.htm)

In March 1981, the Italian police found a list of the 962 members of P2, which contained the names of: 3 government ministers, 43 members of parliament, 43 generals, 8 admirals, secret service chiefs, top bureaucrats and diplomats, police commanders, industrialists, financiers, journalists and TV personalities.

Ex-Mossad agent Victor Ostrovsky wrote that Licio Gelli, P-2's Grand Master, was the ally of Mossad in Italy and that Gelli also had a close relationship with the Gladio group. ( down with murder inc / Israel, Mossad, Iran and a Nuclear False Flag Attack )


In 1999, according to Peter Dale Scott, a former Canadian diplomat, (The Global Drug Meta-Group.) a meeting took place at Adnan Khashoggi's villa in Beaulieu, near Monaco.

Those at the meeting included a member of the Yeltsin cabal and four people with passports from Venezuela, Turkey, United Arab Emirates and Germany.

Between them they allegedly enjoyed excellent relations with: 1) Ayman al-Zawahiri, the 'mastermind of 9/11'. 2) Soviet military intelligence. 3) the FARC Colombian revolutionary group. 4) the Kosovo Liberation Army. 5) (according to a well-informed Russian source) the CIA.

Bush and Kissinger have links to BCCI


Think of the criminal bank known as BCCI.

It involved leaders from 73 countries.

And at the top was the CIA.

"Investigations by the US Senate, NY Attorney General Robert Morgenthau and several award-winning journalists revealed that BCCI was run by the CIA and top US officials." (Inside the Global Banking Intelligence Complex, BCCI Operations)

At Global research, on 12 October 2010, David DeGraw (Inside the Global Banking Intelligence Complex, BCCI Operations) pointed out that BCCI consisted of an alliance of certain:

7. Government officials.
David DeGraw, whose new book is “The Road Through 2012: Revolution or World War III,” points out:

1. BCCI links many scandals, including Iran-Contra, October Surprise, the funding of Saddam, the sale of nuclear technology to North Korea, the funding of Osama and al Qaeda, the drugs trade, the trade in people.

2. BCCI was modeled on top intelligence agencies and corporations.

"This is the story of how the wealthy and corrupt in Latin America managed to steal virtually every dollar lent to their countries by Western banks, creating the debt crisis of the 1980s;

"how heads of state… skimmed billions from their national treasuries and hid them in Swiss and Caymanian accounts forever free from snooping regulators;

"how Pakistan and Iraq got materials for nuclear weaponry and how Libya built poison-gas plants.”

Among the others involved with the bank were high-ranking Republicans and Democrats, top executives at First American Bank, Bank of America, PR firm Hill & Knowlton, cable company TCI, and auditing firms Price Waterhouse and Ernst & Young.

5. Investigative reporter Chris Floyd wrote, “Instead of stopping the drug-runners and terrorists, the CIA decided to join them, using BCCI’s secret channels to finance ‘black ops’ all over the world.”

The black network, 'which is still functioning', operates an arms-trade business and transports drugs and gold.

7. Bin Laden had accounts in BCCI and ran a CIA/BCCI-funded camp.

8. BCCI also funded Pakistan’s nuclear weapons program when they set up the Khan Institute of Engineering Sciences and Technology.

Kissinger and his firm Kissinger Associates played a key role in BCCI.

Five of Bank of America’s senior officers were either on BCCI’s board of directors or helped to manage the bank.

Bank of America transferred more than $1 billion a day for BCCI.

BCCI was linked to market manipulation and money laundering.

12. The Savings and Loan scandal was part of the BCCI Affair.

Many of the failed S&L thrifts were secret intelligence shell companies and were traced back to BCCI and the CIA.

aangirfan: THE SECRET RULERS OF THE WORLD